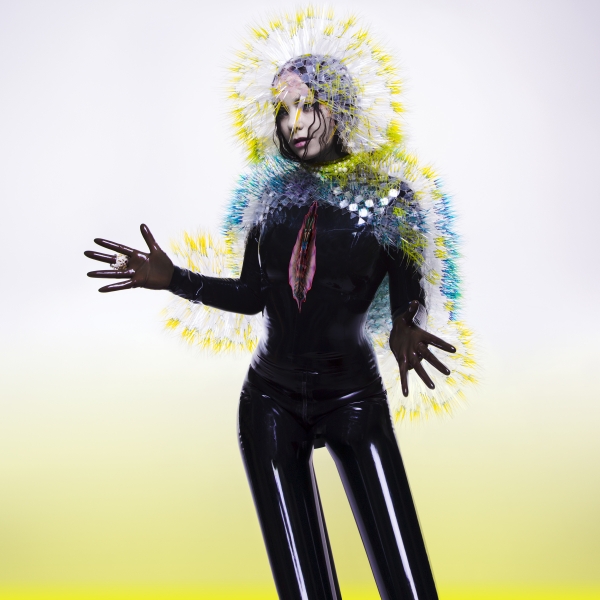 “There is a way out”

So says Björk, a physical and aural embodiment of musical iconoclasm with a career spanning three decades, bridging punk, folk, industrial, electronica, iPhone apps and whatever else she can gather within her swathing vocal range and all-encompassing compositional flair, states of her latest album—Vulnicura—in a post on Facebook.

The above quote is excerpted from a larger note about the album, its concepts, its production and its early release (originally scheduled for March, it was pushed ahead nearly two months after being leaked a mere week after its announcement). It's not the singular point of Vulnicura—an album about breaking up, falling apart, lashing out, pulling together and moving on—but that message is ever present at its core: There is a way out. It's jaded, it's bitter, it's ugly, it's painful—but it ends.

Vulnicura is Björk's ninth studio album—assuming you include her 2000 Dancer in the Dark soundtrack Selmasongs (which you, of course, do) and not her 1977 self-titled child album (which you, of course, don't)—and features production from Arca and engineering from The Haxan Cloak, alongside Björk herself. The album is essentially broken into chapters: the bitter end, the breakup and the first steps forward. Its very name, Vulnicura, melds the Latin vulnero and cura: the wound and the cure—and captures everything between the two.

Though Björk describes Vulnicura as a "heartbreak album" centered on her breakup with artist Matthew Barney, it is not, in the strictest terms, an album about solely about a breakup. Rather, it fixates itself on an entire cycle of heartbreak—its inception and its inevitable aftermath: despondence where there once was love and hope where there was once despondence. For despondence has its way of breeding hope—creating the claustrophobic tunnel through which a light inevitably shines at the end of.

Interestingly enough, Björk contrasts Arca's knack for speedy beat-making on Vulnicura with the three years it took her to produce 2001's Vespertine. Yet, on the Björk Genre-Transcendence Scale®, Vulnicura finds its sound and style nestled most snugly next to that very album. And—speaking from a more biased place—it's also her greatest work since. Though it's built around a thematic concept, Vulnicura is not caught in the lofty conceptual trappings (be they for worse or for better) of the three albums she's released over the last 10 years: Biophilia, Medulla and, to a lesser extent, Volta.

Vulnicura is as dark and ominous as one might come to expect from a Björk album (especially one boasting involvement from Arca and The Haxan Cloak), yet it's filled with these delicate, shining moments within its darkened overtones. There's the guttural conclusion to "Notget," in which Björk exasperatedly offers one last repetition of the song's mantra: "Love will keep us safe from death." Or how Björk and her featured vocalist/"Goddess of Love" Antony Hegarty collude their intricately layered vocal tracks among the dense string arrangements and caustic beats of what the singer calls her "worship-of-love" song "Atom Dance."

Yet where "Notget" and "Atom Dance" showcase the aftermath, displaying disparity laced with a mere tint of hope, at the other end of the spectrum lies the angry and omnivorous "Black Lake" (which Billboard amusingly called a "10-Minute Diss Track" with a snide likening to Big Sean & E-40's "I Don't Fuck With You"). Here, across ten minutes of brooding tension and sparse intermissions, Björk lets the bad blood boil, unleashing all five stages of grief in near unison. She recounts the good, the bad, the worse and the efforts made to make it work, before lashing out "You have nothing to give / your heart is hollow."

Björk has said that she wanted to put this all out there at once, formatted as a chronicle of sorts. She has succeeded and then some. Vulnicura is stark and powerful in a way that Björk has merely danced around for years. Here, in these songs, she has shed all of her skin: the lavish costumes, the genre-defying ambiguity, the punk rock empowerment, the unwavering emotional fortitude and the entirety of all assumed personalities that one might instinctively assign an icon. Here, on Vulnicura, she is simply Björk: a rattled human being caught within an emotional vortex, letting off the sort of violent chemical reflexes we are all prone to. Vulnicura is humanity at its most volatilely sublime.