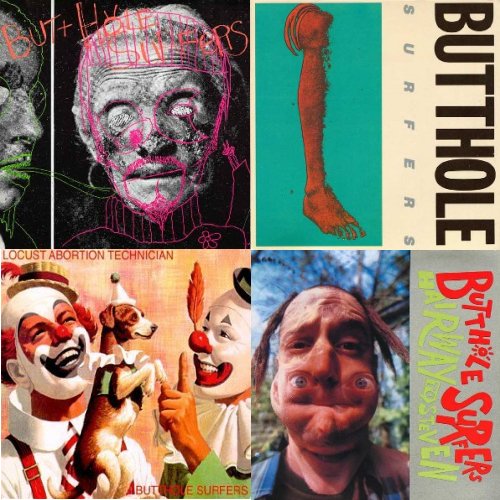 Back in the Eighties, when freaks definitely were not beautiful, a band performing West Coast psychedelia, but not in a West Coast way, and 10 minute lysergic mantras was a genuinely weird thing. These days, things are so sanitised a band as stagnant as MGMT make a couple of highly average albums and because they can’t write pop tunes anymore they’re treated as some kind of musical wig out anarchists.

These Texan punks never had any problem weirding people out and never compromised. Even during their brief flirtation with the mainstream in the mid 90s, where most other underground rock bands were obsessed with not selling out, Butthole Surfers’ lead growler Gibby Haynes embraced selling out by having a good ol’ time with the proceeds and grabbing as much junk as he could get his hands on. This was a band of grubby oddballs who probably carried quarts of jack and loaded pistols in their guitar case, making Kurt look like he actually did smell of Teen Spirit.

This set of four vinyl only re-issues – their first four long playing albums for the label Touch & Go – are not expanded, not noticeably remastered and definitely not for the faint hearted, but a joy to have back in print. Putting them in the place of alternative rock heritage, let’s call them the liquor sodden annoying younger brothers of Dead Kennedys and The Birthday Party.

Of the four albums, 1984’s Psychic, Powerless… Another Man’s Sac is the filthiest and best. Vomit stained, barking vocals through broken microphones soaked with phlegm, rock so slack it could fall to pieces at any minute; it’s like listening to someone multi-tasking the dealings of their drug addiction while trying to learn how to use their instrument of choice with the record button on catching every sordid moment. Amongst this chaos lies sheer brilliance; the atonal guitars and saxophones of ‘Negro Observer’ is a cacophony of free jazz mixed with doom, and the chugging riffs and tranced out monontony of ‘Cowboy Bob’ predates stoner rock by at least a decade but is even more zonked out. ‘Eye of the Chicken’ is the precursor to shoegaze, ‘Gary Floyd’ some kind bastardisation of The Seeds and The Sonics and Cherub, sinister and tribal, the whooshing guitars acting as the first rush of powerful trip, like Syd Barrett – on drugs.

Rembrandt Pussyhorse from two years later is more coherent but equally as chaotic, especially with the introduction of drum machines and samplers that they blatantly hadn’t mastered yet. Amongst these tracks is the brilliant murder ballad ‘Creep in the Cellar’, with a blatant crib of Neil Young’s ‘Heart of Gold’ played on piano and an almost in tune violin, as Haynes yelps of there being “a creep in the cellar that I’m gonna let in, there’s a hole in his brain where his mind should’ve been”, it’s indicative of the paranoia conveyed in his lyrical content at the time.

The studio experimentation continued with 1987’s Locust Abortion Technician, the tapes and loops were more accomplished and of course, this album contained one of the greatest rock tracks of all-time in ‘Human Cannonball’. Those expecting a full collection of pre-industrial rock killers will soon forget all that nonsense with tracks comprising of backwards samples, proto black metal and displaced Black Sabbath riffs. ‘Graveyard’, a track indicative of the hell for leather approach at time, is recorded as normal, then slowed down by at least three quarters, thus inventing sludge rock.

1988’s Hairway to Steven is the most accessible of the four, but is still a total headfuck. Beginning with the thirteen minute ode to Hendrix named ‘Jimi’, they celebrate him by fusing ‘We Will Rock You’s drums with ridiculously over the top solos, and he’s done proud. The rest of the tracks are a Butthole restrained, but they remain way out there. ‘I Saw an X-Ray of a Girl Passing Gas’ and ‘Rocky’ both fit in perfectly with the burgeoning grunge scene (the former could even pass itself off as Mudhoney gone country), but best here is the astounding ‘John E Smoke’. A six minute frantic rockabilly romp recorded as live, with flamenco guitars and a typically Haynesian lyric in “John was a little crippled midget lesbian boy, but stood ten foot tall with a knife”, it’s stupid, over the top, dramatic and brilliant. Why Tarantino hasn’t used it in one of his films yet is a mystery.

Four albums, five years, significant progression and many a catchy chorus about scatology and needles, these four re-issues document one of the most stanky, dangerous, fucked up, dysfunctional and thrilling bands of their time. With absolutely no regard for genre limitation or at times even caring about what they’re releasing sounding genuinely unpleasant to the listener, they certainly don’t make ‘em like this any more. Shame.