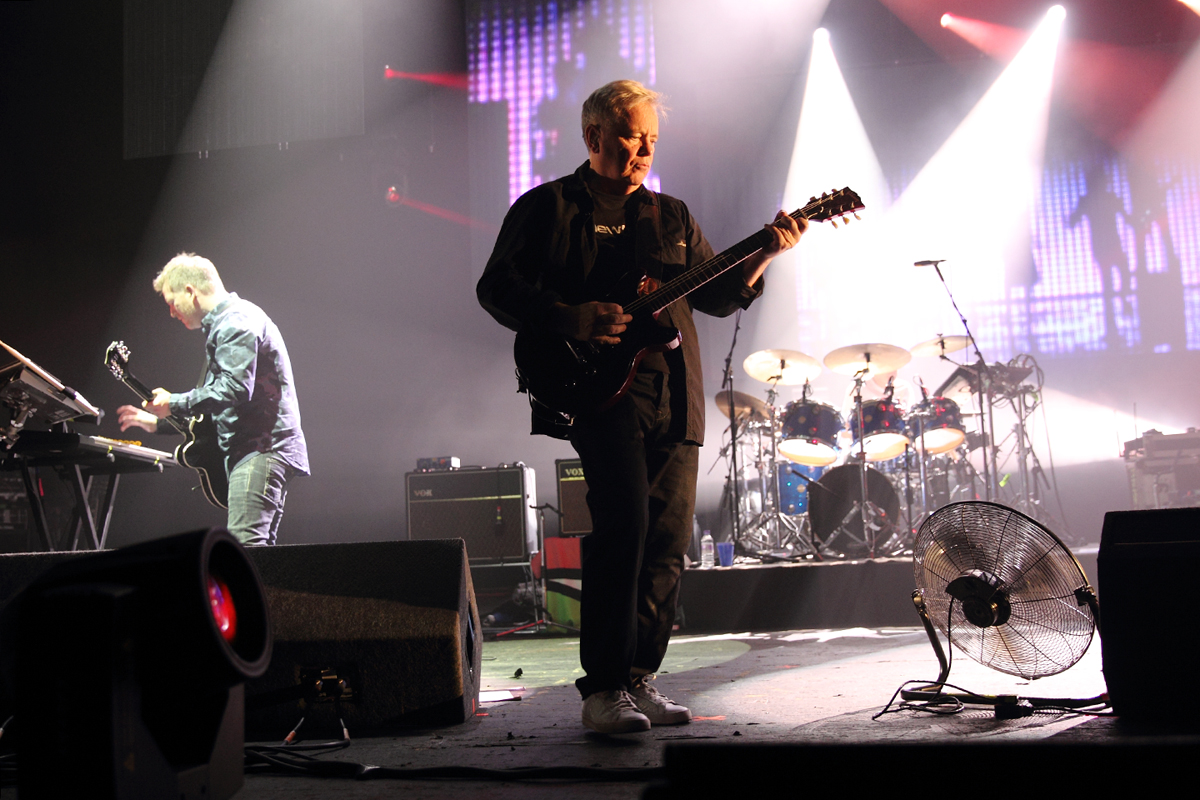 Following the recent return to their electronic roots on Music Complete, New Order are riding a well-deserved wave of goodwill that rather mocks the well documented animosity behind the scenes.

The crowd at London’s Brixton Academy tonight (17th November) are so up for it that some appear to have taken New Order’s 1986 video Pumped Full Of Drugs a little too literally; it's all very well wearing band tour T-shirts fellas, but at least take your work shirts off first.

The recent “Singularity” is the perfect opener, all bleeps, percussion and strobes, while the itchy “Ceremony” remains the perfect bridge between New Order and Joy Division. Stephen Morris pounds the drums, happy as a baby in a bucket of dummies, while Gillian looks perfectly settled behind the bank of keyboards.

You can tell they’re delighted mixing new material with the very old, but they don’t ignore their post-Factory records history, as “Crystal” makes a welcome appearance. Like fondue, you don’t come to New Order for nourishment, or at least not lyrically, and “Crystal” showcases Sumner’s dodgy lyrics as equally as it does their fusion of guitars and electronics. It’s of little surprise that the video gave The Killers their name, even if that was now an alarming 14 years ago.

The pounding “586”, now a set staple, remains impossibly fresh, while “Restless” continues to reveal itself as… well, a pleasant album track your mum might like. Early b-side “Lonesome Tonight” is a strange inclusion, particularly in light of the absence of its flip (the mighty “Thieves Like Us”), and creates a risky dip in energy.

As the band members' names pointedly display over the visuals, an elephant, or rather a leather-trousered- pony-tailed ego, is exposed as absent from the room. Music Complete survived the absence of Peter Hook - there’s the sense the studio was a more convivial place without him - but playing live, they do miss his poodle-rock posturing, eternally surreal amongst the disco extravagance. Newcomer Tom Chapman admirably restrains himself from reproducing low-slung bass poses, but the riffs remain in place - they haven’t taken them out to avoid paying Hooky royalties, but they probably would if they weren’t so often (ahem) the hooks.

The sombre “Your Silent Face” stirs memories like Power, Corruption and Lies was yesterday, yet it’s impossible not to feel a pang of sympathy for Hooky, as the visuals elevate his majestic bass-line over the street lights of a Los Angeles dawn.

The pace is stepped up as La Roux arrives for the marvelously filthy Italo-disco of “Tutti Frutti”, the contagious grin and synth sweeps of which would keep Frankie Goes to Hollywood awake at night. We get a smile, a turn and a microphone flick from Sumner (who’s thankfully stopped yelping over the songs like an excited spaniel) as the infectious melody of “Walking the High Line” bounces the joint. The house piano pounds like M People and Chic still remain in business.

“Bizarre Love Triangle” has the Mod parkas and football lads jumping like the terraces never went away, before the almighty “True Faith” arrives. Truly the band’s finest moment, there’s a certain generation of men who learnt the lyrics of this paean to ecstasy instead of passing their A Levels. It's New Order’s hymn to hedonism and the heroic zeitgeist.

“Temptation” has Sumner playing guitar again like he's just only recently learnt - it’s the disco tune that Oasis never wrote - before they leave the stage. They return with the funeral march of “Atmosphere” leading into the sunset of rock’s now most predictable encore, as “Love Will Tear Us Apart” and “Blue Monday” compete for Song You Least Need To Ever Hear Again.