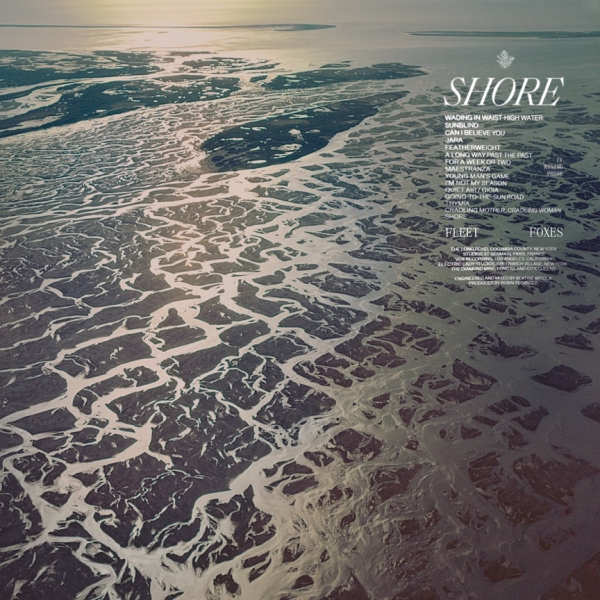 ​Fleet Foxes are a group that seem to score your best moments. Theirs is the music that plays in your head when someone loves you back; or when you surpass heartbreak; or when you are simply content in the day-to-day. It’s honeyed nostalgia poured directly into your ear and it’s palliative beyond measure. That their music has that staying power is doubly impressive considering that for a while there it felt like we might lose them.​​

Having previously created two iconic indie folk albums in the form of Fleet Foxes (2007) and Helplessness Blues (2011) the band went on hiatus until 2017’s excellent Crack-Up. Naturally, this gets people talking about what's to come next. Mercifully, we’ve not had to wait quite so long for an answer, one in the form of Shore.

A surprise record released at the exact moment of the autumn equinox (14:31pm GMT), aside from there being something fittingly symbolic about a Fleet Foxes album coming during the movement of celestial bodies this is also an album forged out of herculean effort, having been lyricless as of February 2020. Coronavirus has no doubt forced the band to implement fast fixes and for the most part they have managed to pull things together remarkably.

Beginning with "Wading In Waist-High Water", a delicate and tranquil piece which builds progressively towards the resplendent majesty of "Sunblind" - it’s like coming home. Fleet Foxes’ secret weapon has always lain in their ability to craft some truly jaw-dropping harmonies and its often staggering just how effective these have become. Singer Robin Pecknold has effectively weaponised that quality on the titular track and "A Long Way Past The Past".

Honourable mention should be paid to the prodigious "Maestranza", a track which sees Pecknold’s voice gambol alongside the synchopated bassline of the chorus in a way that few could replicate let alone manage.

It is worth noting however that Shore is not a perfect album. For instance, the album features a total of fifteen tracks - the most of any Fleet Foxes album to date - and this is either a good or bad thing depending on how you like what they’ve released prior.

Either you’ll love the number of songs on offer here or you’ll find that Shore lacks the razor focus of previous releases. For me, tracks like "For A Week Or Two" or "Thymia" felt like filler, in contrast to the aforementioned "Maestranza".

Additionally, Pecknold has stated that the band would like to release an additional nine songs in 2021 to bolster Shore further, and I can’t help but think some of these tracks could’ve been held back to create two shorter but ultimately stronger albums. Again though, this could easily vary from listener to listener.

Shore is unquestionably subject to the uncertain circumstances in which it was produced. Though it is by no means a flawless album, it is exactly the kind of thing you should be using to set your mind at ease. Fleet Foxes have always been inherently hopeful and thankfully they’ve not lost sight of that, roll on 2021.