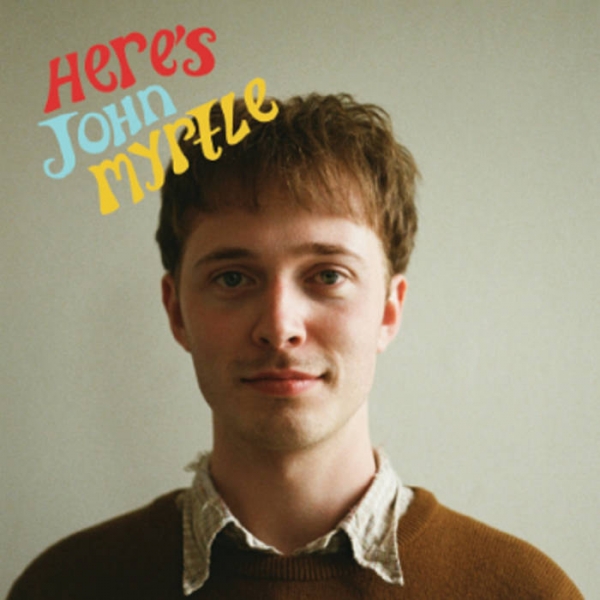 John Myrtle’s debut EP Here’s John Myrtle explores the charming dichotomy between old-school sensibilities, while living in, and bringing them to, the edge of modernity.

Myrtle’s music came to fruition in his bedroom: the breeding ground common to every artist of this generation’s musical vanguard. “I managed to acquire some old, barely functioning recording equipment and set to work recording my own songs,” he explains. “The equipment I got really helped towards a particular sound I was after – even if some of it caught on ﬁre at one point.” The result of music produced in an intimate, honest place is an intimate, honest sonic signature. You get the feeling that this was made just for you.

In 2018, Myrtle would enter the fray of London’s DIY music scene, where one would become four on the live circuit. There, he would meet Sad Club Records. While his SoundCloud account is a trove of demos, charting his music all the way back to his most nascent work, physical releases on Myrtle’s music were scarce to say the least; ‘Foggy’, the only track released tangibly, made its way onto Sad Club Records’ compilation cassette earlier last year. Myrtle’s DIY ethos is expressed in every facet of his work: his relationship with independent label Bingo Records, in tandem once more with the pioneering cassette label Sad Club Records, is testament to that. “The emerging scene in London is inspiring and to be a part of it is great. Having Sad Club help release my EP is a dream as I have been a fan of theirs before they knew who I was!”, Myrtle says.

John Myrtle’s music is soporific: it calls to mind the hazy, first-light of a morning, occupying the space between wakefulness and sleep. ‘There Must Be Something More To You And Him’ toys with a heavy heart; Myrtle’s dreamy delivery carries shades of Simon & Garfunkel. The pensive plucks of the guitar sound at once present and at some distance. The brew of these elements, weighted with a sombre tone, leaves you feeling that John Myrtle would not at all be out of place on the soundtrack for "The Graduate".

If you think you have Myrtle sussed, I assure you – you haven’t. The presence of the track "Cyril The Slug" on the EP, at the heart of its five acts, might prompt you to raise your eyebrow. You’d be forgiven for thinking its out of place, in the midst of the Parma Violet-sweet "The World Will Keep Spinning Around", with its up-tempo, staccato pace; "Foggy", a reflective track, wrestling with the liminal, “neither lost, neither found”; and the elegiac "Beware of Love", with its mournful backing harmonies. "Cyril The Slug" is, in the words of Myrtle himself, a “tongue-in-cheek comment on keeping up suburban appearances through the eyes of a fat slug.” His voice is pitched, with a mockingly jaunty instrumental, demonstrates Myrtle’s versatility in subject-matter and delivery.

The title "Here’s John Myrtle" is just as good a statement of intent as the music itself. A carefully considered release, every dimension harks back to his wish to be sincere. Myrtle’s is the kind of music you listen to alone, in the unheard-of hours: a companion.