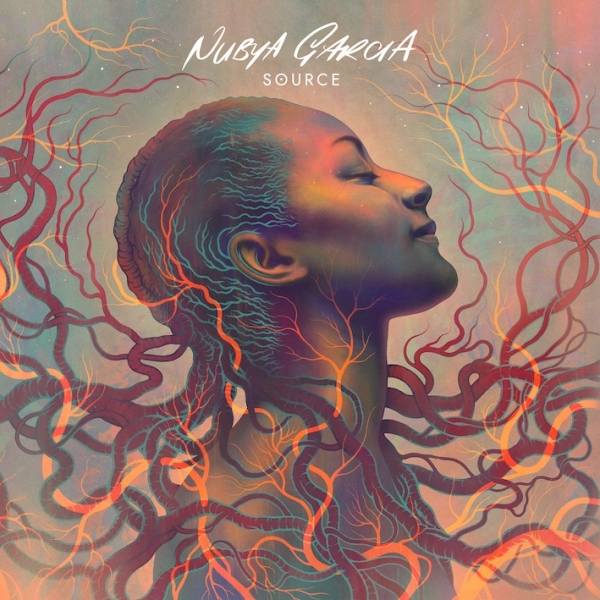 Saxophonist Nubya Garcia, currently helming the resurgence of the London jazz scene, is finally setting out on her own, and plotting an ambitious path to boot, after a stint with sextet Nérija.

After a couple of solo EP’s, Garcia’s studious understanding of just what the saxophone is capable of: when it needs a bit of help from some friends, and when it just needs to dissolve, is what gives a joyously vibrant noise the right kind of handling, and healing power.

The majesty of a genre who's only sole human vocal input, in the case of Source, comes on the hypnotic and meditative “La cumbia me está llamando”, and closer “Boundless Beings” (ft, Akenya) is the scope for deeper meaning. Within each bar of celebratory, or questioning music, comes the duality of Garcia’s meaning and your own. Feel free to plug the gaps where human voices tend to lead the charge, let the expanse of Garcia’s debut uncover your understanding

Blending warm tones into genteel spasmodic flourishes that, in the same manner as a summer storm, rumble and crash when you least expect it but once the clouds have passed comes that fresh crisp air with warm undertones. Even the moments where Garcia steps back, allowing the rest of the instrumentation, provided by Joe Armon-Jones (keys), Daniel Casimir (double bass) and Sam Jones (drums), to flourish and crash around give a sense to her ability in knowing when to hold ‘em and when to fold ‘em.

The epic titular track, clocking in at just over twelve minutes, and featuring collaborators Ms MAURICE, Cassie Kinoshi and Richie Seivwright (also appearing on “Stand With Each Other”), rides along in a smooth wave. It also proves jazz’ adept nature; where if you aren’t paying attention you’re certainly guaranteed to miss things. But even if you are paying attention the depth of the matter can also be missed - it’s a genre that adapts to your context, and in the instance of Source, Garcia has created an album that wants to help you in any way it can, without overloading your surroundings, or becoming obnoxious in itself.

Delving into fusions of reggae (“Source”), afro-beat (“La cumbia me está llamando”) and everything in between, Garcia triumphantly tries to discover just who she is, while offering that sparkling sound of a world ripe for the taking. Chockful of jazz that embraces you in a familiar feeling, Source is akin to an old friend you may not see for a while, but whenever you do, the world feels that little bit brighter and it’s as if no time has passed at all.