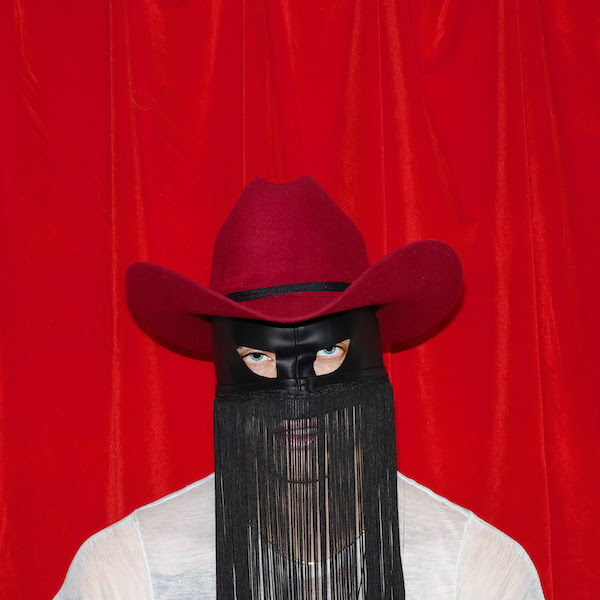 A royal red cloth curtain hangs behind Orville Peck’s piercing blue-eyed stare, leather-fringed mask and burgundy Stetson. There’s the well-travelled familiarity in his Sub Pop debut – the rodeo’s twang working the miles between graft and glamour, between Reba McEntire and Willie Nelson. But it’s a collection that bypasses the traditional Americana roads in favour of the scenic route. This is Orville Peck, whose fans name their chickens after him while he teases the idea of a baritone country cover of "Lady Marmalade".

If you think this places him, it doesn’t. He won’t tell you where he’s from, despite Pony flirting around the edges of autobiography. He’s wading through his former lovers in "Big Sky", the abusive boxer with the romantic punch and the overly protective jailor in the Florida Keys; there’s a lulled ode to nostalgia in "Kansas (Remembers Me Now)"; "Buffalo Run" is a slow-building strum into the racing hearted badlands of the Northern Plains; album opener "Dead of Night" is held around a faint percussive tambourine rattlesnake and a solitary allure. As Peck’s lustrous voice swills effortlessly into the intonated croon of Chris Isaak, you can hear the Nevada desert’s incompatibility to young, same-sex love.

Some tracks sound like Elvis ballads drowned out by faulty styluses and retro sound systems. Others are breathy song-cycles of gospel folk. For all the rich breeze and slinking Tarantino guitars in "Hope To Die", the track more resembles an ‘80s Mazzy Star-era shoegaze piece for the country purists to languish on. With Pony, Orville Peck has put himself in the boxing ring for his own ’68 Comeback Special. He is the anti-hero, steeped in mythology and a necessary anonymity (“sometimes being an alive cowboy is just enough.”). But it’s the auteur’s approach in the queer country revolution. Despite its masked obscurity, it’s the tenderness that wins the fight.