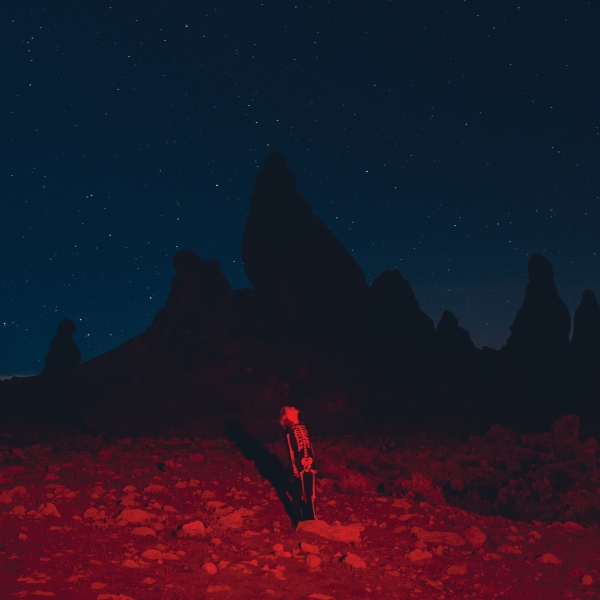 Punisher is that rarest of beasts. A record that grows with each listen, that takes it’s time for its stories to unravel, and that wears its love of literature on its sleeve as comfortably as it does its love of music.

That Punisher is as much of a literary, storytelling experience as it is a musical one, is clear and present in the accompanying short story by Carmen Maria Machado, entitled Yesterday, Tomorrow. A biography of sorts of Bridgers, it opens with a line that provides a teaser of the literary fascination to be found in the songwriters' second solo album.

“The house is exactly what you’d expect: practically a studio apartment except it stands on its own, draped in honeysuckle and Dutchman’s pipe; a yard of dune sedge and stone” With the devil in the detail, it then casually mentions the protagonists dog is dead, and buried in the lawn.

Yesterday, Tomorrow brings the opening line of Donna Tartt’s The Secret History to mind, a story of group of an elite, but ultimately doomed students of Greek mythology, "The snow in the mountains was melting and Bunny had been dead for several weeks before we came to understand the gravity of our situation." On Punisher’s opening line, on “Garden Song”, the mystery and sense of tragedy is mirrored in Tartt’s text. “Someday I’m going to live in your house up on the hill / and when your skinhead neighbour goes missing, I’ll plant a garden in the yard”.

“Garden Song” sets the scene for the story that's ahead; on the surface the tale is an idyllic, seemingly innocent setting, yet there are always skeletons - of the literal and metaphorical kind - in the closet; Bridgers’ donning a Halloween suit on the cover adds a further artistic clue.

And like any great story, there are red herrings aplenty. If the brisk grunge-rock of “Kyoto”, embellished by delirious horns, suggests that Punisher is the sound of a musical reinvention, it’s not quite as clear cut as that. Doffing its cap to Air’s "Alone in Kyoto" from the Lost in Translation soundtrack, “Kyoto” is similarly a tale of alienation, of being alone, of being misunderstood and wanting to go home to enjoy being alone.

The joy of being alone, and the nature of musical and literary infatuation and intrigue, is brilliantly painted in the title song. An ode to one of Bridgers' heroes, “Punisher” references The Snow White Cottages in L.A, where Elliot Smith used to live in a rented cottage, on a street created in the 1930s to house the writers and animators of the Disney classic.

The observational lyrics wouldn’t be out of place on a short story - “Walk right by the house where you lived with Snow White / I wonder if she ever thought the storybook tiles on the roof were too much.” It goes on to describe an imaginary conversation between Bridgers and Smith, “What if I told you / that I feel like I know you?” before closing with the heartbreaking “But we never met.”

The final paragraph of Machado’s story opens with a line that returns to the nature of the bittersweetness of solitude. “She sits near them. They are together but at the same time they are alone, as we all are” and we come full circle. Yet there are further twists in the tale, the ennui of the pissing contests that is "Savior Complex" and the Armageddon of the closer "I Know The End.", a closing chapter title William Faulkner would have been proud of.

Bridgers debut, Stranger in The Alps sprung delightfully out of the blue, and whilst Punisher doesn’t jump out with the same immediacy, that’s where its real strength lies. Great books take time to fall in love with, they need to be revisited over again to reveal their wonders. It’s exactly the same story with records.

Punisher triumphs in the joy and pathos that’s to be found in returning to its stories, where like Donna Tartt’s A Secret History, there’s always new depths, clues and answers that make you want to dive right back in.