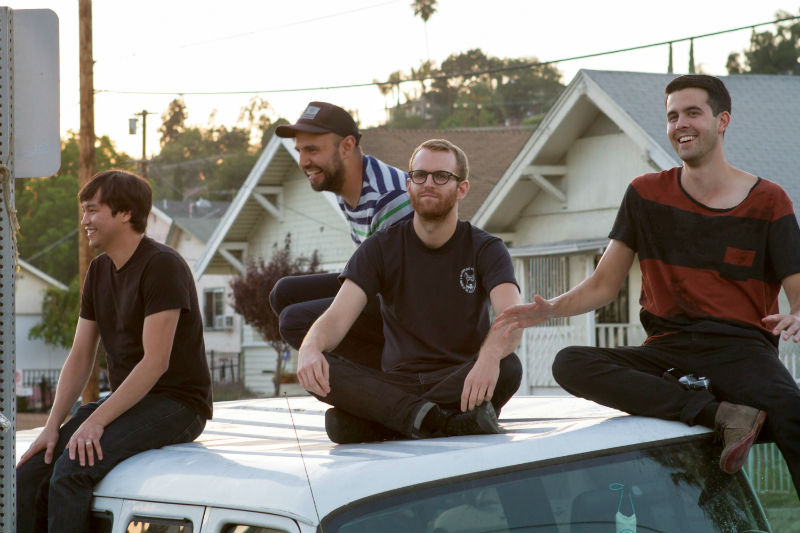 Francisco The Man's Loose Ends been a lengthy seven years in the making - a seven years punctuated by single releases, EPs, lineup alterations, hiatuses and a "near-death experience at a roller rink" - so it's no small miracle that this record is here at all, beaming at us from its jagged edges.

Perhaps surprisingly, given its gestation period, the band claim that "we [didn't] put too much thought into the LP." They continue, explaining that they did put "care" into it,  but that "we just wanted things to come out naturally. Honest. It's representative of four dudes ripping through 10 songs and having a good time."

The L.A. quartet normally pummel ears into submission with a warped deluge of guitar freneticisms, riff-heavy rock, popgaze and dreamy mists. We managed to sit them down long enough so that they could run us through the ins and outs of Loose Ends.

I wrote the bulk of this on acoustic guitar while sitting on my girlfriends couch. Worked it out with the band. It ended up a lot heavier than I imagined it would which I think is a good thing.

We tracked this song ourselves in a little bungalow out in Joshua Tree. It was an underdeveloped "idea" we had and ended up really coming alive when we hit record.

I demoed this song in my bedroom before bringing it to the band. Everyone shreds on this song. It has a lot more energy than initially.

This is one of the most collaborative tracks on the LP. If memory serves me correct, it just came out at rehearsal one day and that was it. One of my favorite tracks on the record, personally.

It's fun to see how far you can take two chords. The lyrics on this song make me cringe less than normal.

We tracked this song live and a bit improvisational. It's sorta a stream of consciousness deal. We had the beginning sorted out but that was it.

Brock wrote the chord changes for this track. It took us awhile to figure out how to end it but once we did it came together.

We wrote and recorded this song out in Joshua Tree. Brock was messing around with this old Casio and we thought it sounded cool with we started playing along and luckily had some microphones close by.

"I Used To Feel Fine"

The longest song on the record. One of my favorites to play live. Sometimes it's nice to zone out for 9 minutes.

"It's Not Your Fault"

Avi was kind enough to come over when we were tracking and add some rad fuzzed out guitar to the end of the track. Watching him play guitar is quite the treat.

Loose Ends is released 19 January via Fat Possum. You can stream the record in full below, and pre-order it now.